I received an email question. You’ve been gone a while, what have you been up to?

Well, quite a bit actually. Not photographically but life wise.

Most recently snowboarding with my kids.

But we have been having other good times as well.

I guess it’s been a pretty good year.

My family and I visited the Butterdome Craft Sale yesterday. My wife and I have not been there in 5 years. We were long overdue and felt the kids really needed to experience it as well.

We found these great little clay dragons that back in 2010 I picked up the photographer version of.

//embedr.flickr.com/assets/client-code.jsThis year we found one for each of the kids. Jacob, being into Taekwondo, got this one…

Mikayla, our dancer, got this one…

These are very cute and in my opinion, timeless.

I’ve been thinking for quite some time that I needed to begin a new photo project. I need something to get me back into the swing of taking photos regularly. I just don’t do that enough.

Enter my new project WTF. Daily I see things that make me ask WTF. At work, on the road, at home, well everywhere really. Things just make me as WTF. I’ll be using a combination of my DSLR and my smartphone for this project. You never know where these things will happen and I just can’t have my DSLR in hand all the time. But, my smartphone is always with me to cover it.

So, to start us off here are a couple photos of a 4 Way Gas Monitor we use in the oil field. These thing are practically indestructible. So when this one was in the box of returned units, it made me ask WTF. What had to have happened to this unit to cause this damage? Was there a report that I’m unaware of? Is it being swept under the rug? Who knows but it makes for some great WTF photography.

This is a great beginning to what I hope is going to be a fun project.

My son and I have been talking for the last 2 or 3 years about getting a GoPro. All those fun activities we do would be so easy to capture with the GoPro. Biking, skateboarding, swimming, water sports, fishing, tobogganing, etc, etc. Really no end to what we could do with it.

Last week all that talking came to an end when we purchased this.

The GoPro Hero 3+ Silver Edition. What a cool little video camera! So far we have been playing with it and practicing with it to see what it’s limitations are and we could not be happier. Well I could not be happier anyway. My son, not really understanding the whole video editing process, is a little less excited than me but not by much. He would rather just shoot and upload.

I was able to make a really cool timelapse when we rearranged my son’s bedroom. Looks really neat.

I also put together a quick cold afternoon’s bike ride to see what different points of view from my bike would look like.

Nothing really special but the potential for amazing footage is there. Next summer at the lake is going to be a whole new ball game.

This thing is going to be a lot of fun I can see that!

This fall I discovered that I’m truly fascinated by the Aurora Borealis. We had some pretty good displays out at the lake this year and my son and I spent some good quality time on the beach well after dark watching them move around the sky and taking some long exposure photographs of them.

I’m not used to taking long exposures or night photos so it was a learning experience for me. It took me quite some time to figure out the camera settings that would give me the best results. Lots of trial and error. What I learned was a long exposure of say 30 to 60 seconds and a wider aperture seemed to give me the results I was looking for. Although a small aperture gave some really good effects on some lights along a dock. 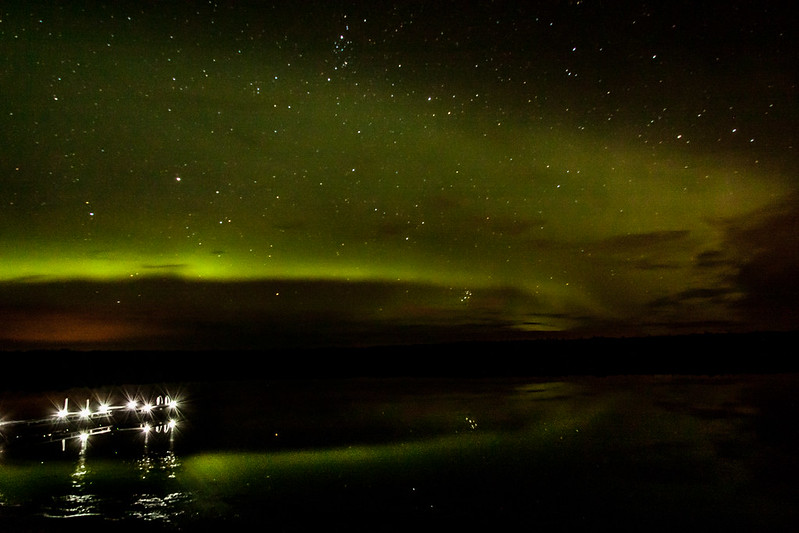 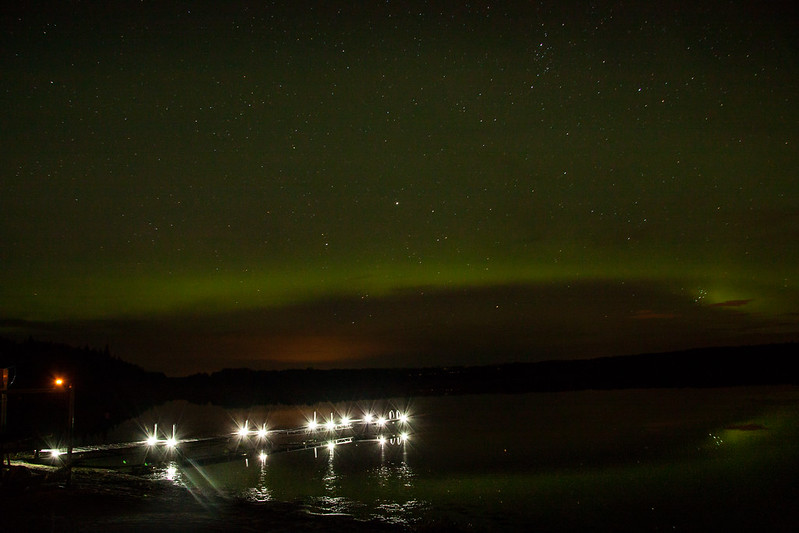 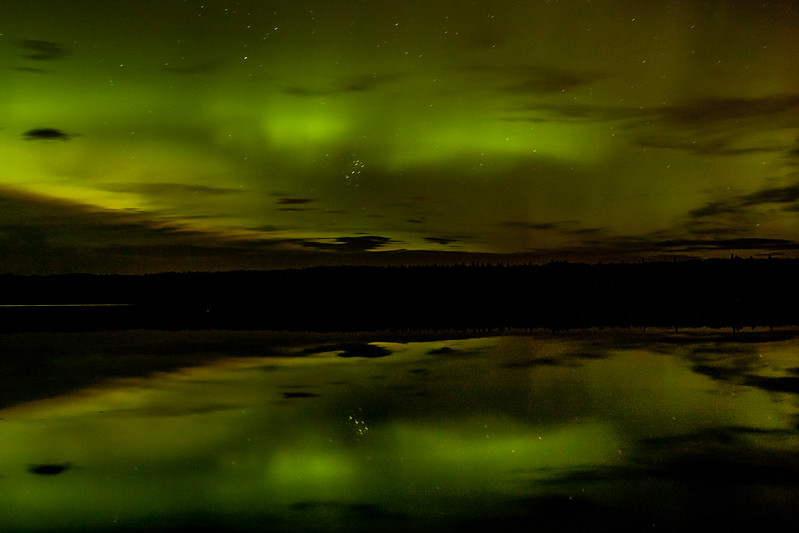 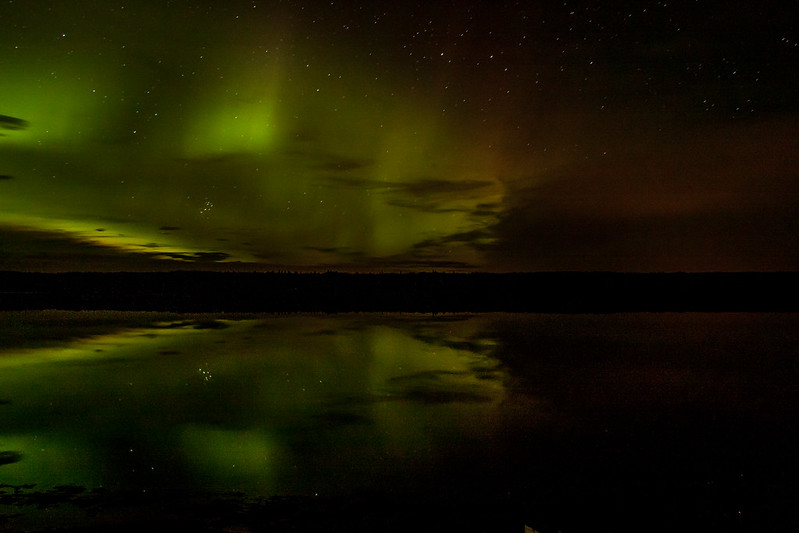 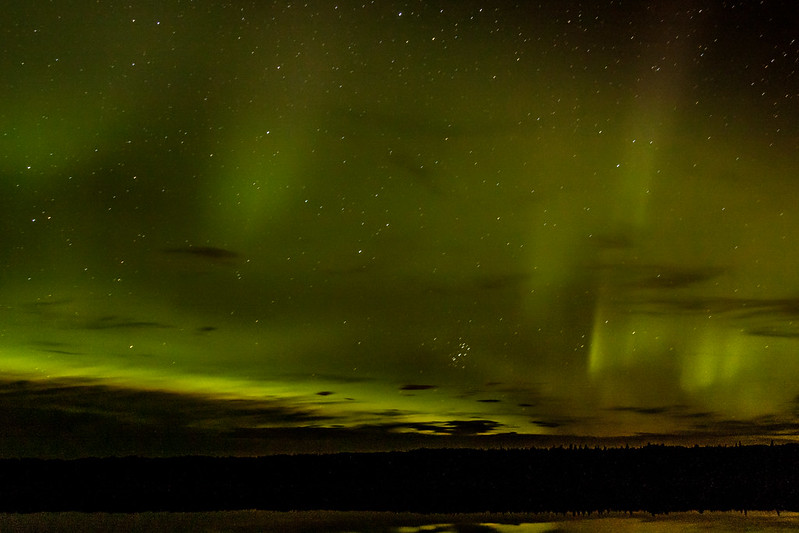 I’m hoping to get out this winter and see what kind of results I can get with the reflective snow. If I get the chance and the weather cooperates.

My wife, kids and I found ourselves with some much needed and wanted solitude this weekend. We were the only people on my wife’s parents lake lot. Everyone else was in town for the weekend. This has only happened one other time in the 15 years I’ve been with my wife. It’s rare. Very rare.

Getting to spend time at the lake with just my wife and kids was a really big deal for me. I enjoy time with them when we have no other people pulling at our attentions. It was such a relaxing time even though we were only gone from home for 27 hours. It felt like much more than that.

First off we had to take my wife’s Ford Escape out to the lake as my truck is having some old age issues and requires a new front hub! We were not sure that everything we needed to take out would fit but we managed and didn’t even have to use the roof bag! Although it was a tight squeeze to get it all in there.

Once we unpacked we decided a swim was in order but it turned out to be cooler than we hoped due to the heavy rainfall a couple days in a row before we arrived. The raft was also loaded with bird crap and we really didn’t feel like cleaning that off so our beach time was cut quite short. That’s ok we still had a lot of time to ourselves being the only ones out.

We bought a new BBQ for the lake and the afternoon was a great time to put it together so we could try it out at supper time. The price was right and it works fantastic. Even has a side burner. I was able to cook on it and keep some of the heat out of the trailer as a result! We’ve been wanting a new BBQ for the lake for a few years now and the time was right. My wife’s parents have one up on the deck but carrying your meat up there and then back down to eat once it’s cooked gets a bit tiresome after a while.

Can you believe this?! We each had our own side of the fire! No crowding no fighting the smoke! Each on a side. Oh man talk about bliss. There wasn’t even any wind to blow the smoke at any of us.

Smores for all! What is better than smores over the campfire? Nothing.

The morning before we left, the boy and I decided to do some fishing of the dock. Well, he stood in the boat and I got the dock. I’m very happy he is liking the whole fishing experience now. It’s a lot of fun.

As you can see by the photos below, it was catch and release only. They were way too small to keep but a lot of fun to catch. Maybe on our vacation we will find some big ones.

I’ve decided that it’s past time for me to give back to the photography community. I’ve learned so much in the last 7 or 8 years. I’m constantly being asked by people I know how to make their photography better or how I would take this shot or that. So, I decided that I would start a new project on my site here.

Beyond The Snapshot is born.

You will notice a new menu option on my site called Beyond The Snapshot. Here and in the sub menu from it are going to be my “lessons” for lack of a better term.

I’m going to cover everything from how to get better photos from your current camera all the way to composition and creative vision. Of course this is not all going to happen over night but over the next several months and beyond, I’m going to drop all my knowledge, for better or worse, on you.

I hope you enjoy the pages. Please leave me some feedback in the comments on anything you would like to know about and I’ll do my best to answer it in my lessons.

"I never wanna be seduced by all those pixels to the point that I confuse a detailed picture with a good picture." - Joe McNally

"Take the damn flash off the camera" - Rick Sammon

"Never lose the heart and the eyes of a student." - Gavin Seim

"Reality leaves a lot to the imagination." - John Lennon

"Growing old is mandatory, Growing up is optional" - Anonymous.